'Proper' sausages and burning my meatballs..... 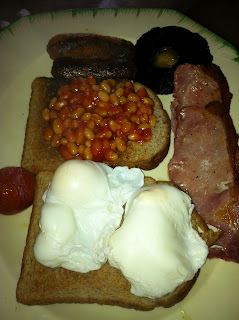 and very tasty it was too. My sausages however didn't taste as they should and I initially thought they were undercooked. It was only on closer inspection of the contents of my fridge and then my kitchen bin ( move over Sherlock Holmes ) that I realised that my dodgy snags were infact full fat thrusters and not my ever so good half fat cumberlands. This potentially has ruined my whole week of being good ( apart from book group) so I shall blame any weight gain or stay the same on my husband, who pretended that he thought I could have the naughty snags. He knows fine well that I can't...........and he almost got away with it if it hadn't been for that meddling Liz.

I like Sundays because it's a great excuse to do very little and to lie around in my pyjamas. I pottered about here and there, did a few invoices, did a bit of washing, Martha watched a film on her ipad and did some last minute homework, Al watched something sporty on telly and the dogs hid one of my slippers, which I'm glad to say has been retrieved from behind one of the sofa cushions. As I hadn't done much else I thought I would make something nice for dinner and as much as a full roast dinner never fails to appeal to me I chose an easier option - spaghetti with meatballs - all homemade and SW friendly of course. I added lots of garlic, herbs , onions etc to the mince, made the balls and then whacked them in the oven. I then got so engrossed in my kindle that I forgot they were there so this was the result.............. 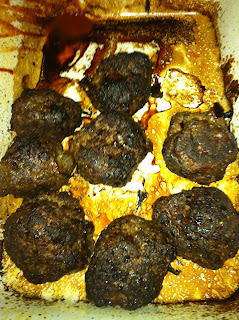 I reckoned that if I opened the kitchen window wide and made a really nice sauce then nobody would be able to tell the difference. Hattie is out for dinner, Al doesn't eat pasta , so that only leaves Martha and out of everyone in the house she is the one most likely to rumble me. I have made a lovely tomato sauce to go with them and have dropped the balls in and simmered them a bit longer so fingers crossed with a bit of cheese sprinkled over the top my secret will be safe. I am having a glass of wine and am really hungry so am personally not bothered if they are a little 'well done' - anything will taste better than those sausages which I don't think I have digested yet. Cheers everyone! 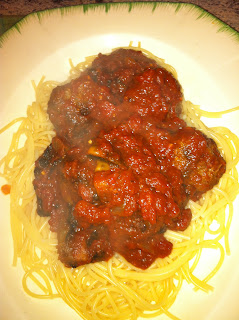