I feel better today after a sort of 'me' day yesterday. I missed being at fat club but I also enjoyed having fish and chips and wine for dinner last night. Very yummy and very illegal but sometimes you just have to break the rules..........

First thing this morning my ( a bit better but still milking it ) husband noticed that Freddy seemed to have something stuck to his eye. It was white so he thought it was a bit of paper or perhaps some foam from the sofa that him and Mutley are enjoying ripping to pieces. We managed to pin him down and on closer inspection, it wasn't anything stuck to it - it was a bit of his fur missing. 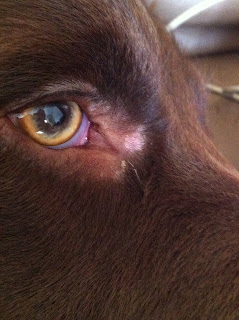 Freddy and Mutley love to 'play fight' and I think that the missing patch could be forensically linked to one of Mutley's teeth - I reckon it's just the right size and shape. A while ago I thought that Mutley had a piece of triangular shaped white paper stuck to the bottom of his ear but when I looked again it was infact a piece of fur missing so I think Mutley was only getting his  own back. The plusses of having 2 puppies is that they play with each other all the time but the downside is that bits of them does get removed by the other. Maddie does not partake in any of these games , she just sits and watches with disdain and growls every so often.
Knowing that I was a bit down in the dumps, my blog buddy Leanne dropped a lovely bunch of her homegrown flowers down to me along with a card in which she had written a poem referring to when I lived in Leeds. The words 'seeds' and 'weeds' ( obviously ) and 'bum' were used in this poem - so I shall leave you to make your own assumptions as to where the seeds went and what happened next. They are now on my mantlepiece and looking very pretty. 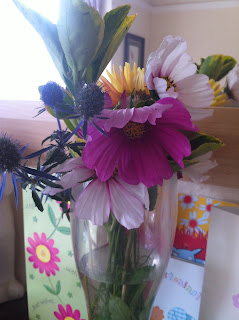 I think here in St Ives, it is such a close knit community that we do all look out for each other which I think is wonderful. I have friends at fat club, book group, quiz friends, work friends and friends that are just friends and it's nice to think that we all have each other's interests at heart. As they would say in the U S of A ''yo sista, I got ya back''. Am not quite sure what the Cornish equivalent of this phrase would be, but as Leanne is from Bristol, she would probably say ''ere mucker - cheer up''.............which you'll all be glad to know that I have!
Posted by Unknown at 05:39