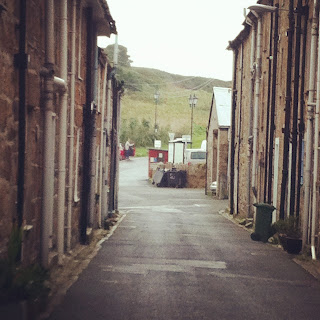 and it was right at the bottom of it that I had a 'set to' with 2 obnoxious  men and one incredibly stupid woman.
For thos of you that aren't familiar with Island Road, it leads to the most sought after car park in town but most people don't know that there is room for 2 lines of traffic. The left hand line is for people that want to use the carpark and the right hand one for people want to drive round the corner and exit town.
The ISW ( see bold above ) was parked somewhere in the middle and was talking to one of the OM from the car in front, no doubt probably bemoaning the fact that there are no muti storey carparks or Asdas on the harbur. We were peeped at by  the other OM who was trying to access Island Road from the narrow sliproad 3/4 down on the left. I mouthed to him that we couldn't get passed the ISW and he rolled his eyes and mouthed something back. I then got out of the car and asked ISW if she minded 'pulling in a bit' as we needed to get past and we weren't going to the carpark.
The first OM yelled 'yeah alright alright' in mockney gangsta stylee ( I think he thought he was in a Guy Ritchie film ) and I then mouthed back to OM number 2 to stop peeping when he didn't even know what he was peeping at.
ISW sort of moved and as we scraped our car around hers I told OM number 2 that it was two lanes and hardly 'rocket science'. He yelled at me to smile and I think may have called me a miserable cow.
He's right - I am a miserable cow and on days like this am more than happy to be one.
St Ives has small windy roads that are not built for Chelsea tractors or aggression - the Cornish take their time and do everything 'dreckly' and it's sad to see bully boys and driving and parking 'experts' littering the streets.
It is also bloody cold.
I kept checking the temperature on my iphone last night and St Ives was 6 degrees. My hometown Alnwick was zero degrees and had snow and Cardiff was 2 degrees and as Hattie was our and about I kept hoping that she had wrapped up warm.
I have a headache, I have eaten ice cream, I am tired and tonight I am having fish and chips.
I know I know I know that I was trying my hardest but after the stresses of today I think only fried food and alcohol ( merlot) will placate me...............oh and X Factor too.
The clocks go back an hour too so technically that means an hour extra in bed.
I am going to explain this to the spaniels later - in between mouthfulls of the red stuff and mushy peas.
On a jollier note - this is what anyone arriving in St Ives would have been greeted with today. 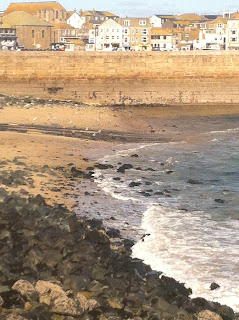